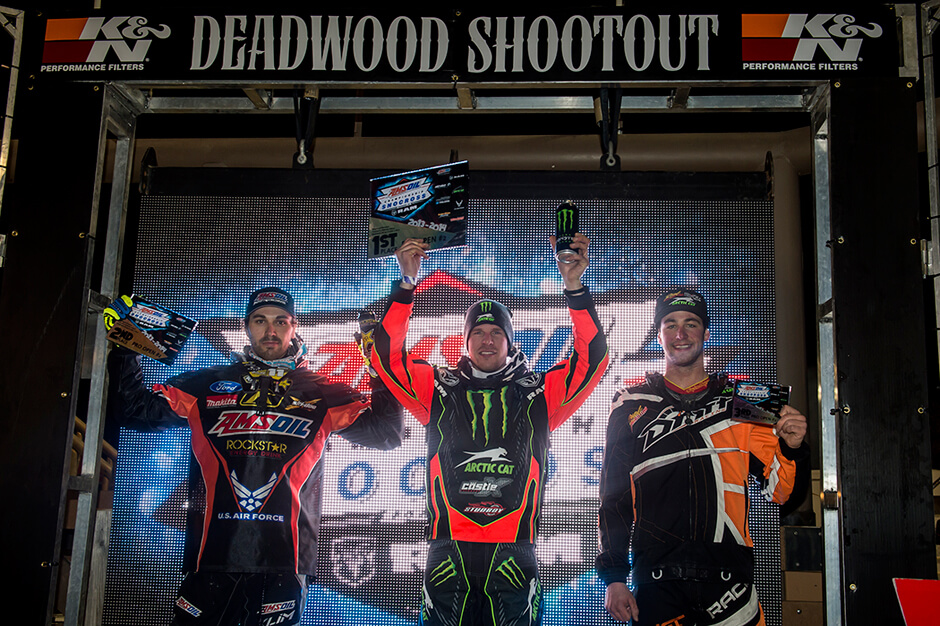 City of Deadwood gets behind the event, creating what’s become a yearly winter happening for motorsports enthusiasts throughout the region.

MINNEAPOLIS (May 1, 2014) – ISOC, the International Series of Champions, producers and promoters of  2013-’14 AMSOIL Championship Snocross, powered by Ram, are pleased to announce that the Deadwood Snocross Shootout, presented by K&N Filters, has been named the Event of the Year for America’s premier competition snowmobile racing series.

Contested on the floor of the famed Days of ’76 Rodeo Grounds, the world’s greatest professional snowmobile racers engaged in one of the year’s most epic battles this past January as sophomore Pro Open class racer Kody Kamm (Polaris) was able to put a stop to stop to Arctic Cat racer Tucker Hibbert’s six-race win streak in Friday’s opening race. Hibbert would rebound on Saturday in a last-to-1st statement race that many considered to be the turning point in Hibbert’s championship run this year.

The incredible racing had everyone in attendance on their feet, putting an exclamation point on a week-long celebration of the sport of snowmobile racing in Deadwood.

“The officials with the Days of ’76 Rodeo Grounds and the city of Deadwood did a fantastic job in hosting round four of AMSOIL Championship Snocross, providing a formidable venue that led to some of the best racing we saw all year while also rolling out the red carpet for the fans all week long with numerous snocross-themed events and promotions,” said Carl Schubitzke, ACS President/Race Director. “Everyone on the AMSOIL Championship Snocross tour was impressed with Deadwood’s enthusiastic ‘all-in’ attitude towards the sport of snocross.”

AMSOIL Championship Snocross’ tightest racing quarters of the eight-round season, Deadwood provides a unique setting for the world’s premier snowmobile racing series. Fans that pack the stands of the Days of ’76 Rodeo Grounds witnessed a grueling gladiatorial-like battle of man and snow machine the likes of literally had them on their feet for much of the main event. Multiple AMSOIL Championship Snocross classes – from kids and top area amateur snowmobile racers to women and the pros – rushed around the famed Days of ’76 Rodeo Grounds on motorized bucking broncos, flying over manmade jumps that sent the 400-pound sleds hurtling well over 100 feet through the air. High speeds and shoulder-to-shoulder racing action created a snow machine racing spectacle the likes of which will drew fans from all over the region – creating an economic windfall for the city of Deadwood and its businesses!