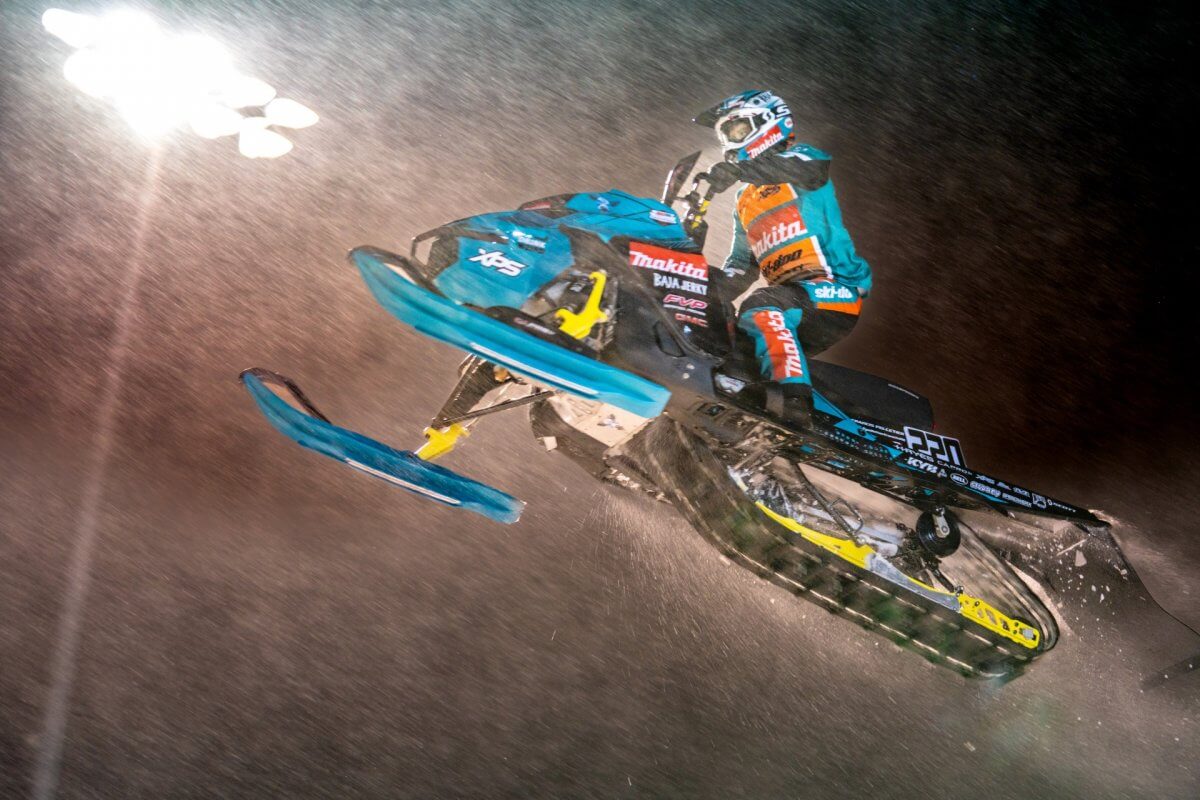 Dubuque, Iowa ~ The 2022 AMSOIL Championship Snocross series is now four rounds deep and the action over the first two full weekends has been palpable. The stars of the sport have shown up, and the younger riders are starting to show off their promise and potential.

With two rounds of racing each weekend, teams and riders are used to adjusting their sleds and their mindsets. But the series also went into modification mode between rounds three and four. Friday’s big, winding track was completely redesigned overnight. Gone were the tight turns and sled-stopping bumps. Instead, series officials went traditional by rolling out a huge oval, with traditional rhythm sections and big rollers that supported multiple lines a passing aplenty.

When the weekend experience in Dubuque came to a close, it was a repeat performance by two of the sports young guns that stole the show.

There are times that a racetrack and a driver are a perfect match. That seems to have been the case for Francis Pelletier this past weekend. Despite major changes to the Dubuque track from Friday to Saturday, Pelletier seemed to know where all the right lines were hiding as he put in a pair of dominant showings.

Pelletier came flying out of the gates and was neck-and-neck with Elias Ishoel. Just after the first turn, Hunter Patenaude split the two for a three way sprint to the finish line jump. After the jump, Ishoel hit the ground, leaving a battle for the lead between Pelletier and Patenaude. While their showdowns in Pro Lite featured a lot of back-and-forth, it was a streaking Pelletier that pulled away from the jump, sprinting to his second straight win.

“I think, just all the effort we put in just paid off,” said Pelletier on his weekend sweep. “We are always doing our best, so I want to thank the whole Warnert team. Thank you for having me on the team. We are going to have a nice rest and we will see you in Deadwood.”

Patenaude suffered a lung injury in round two in Shakopee and fell off the pace during Friday’s final. On Saturday, he was able to catch his breath to keep in touch with Pelletier. Patenaude’s commitment and smooth riding style helped him finish second, his second podium in 2022.

“I started off in second and I just kind of had to ride my own race,” said Patenaude. “I just trusted I was going to be able to find the strength in the end and just trust God that he’d give me the strength that I needed and the wind in my lungs, and yeah, and then I made it through.”

Oskar Norum was in prime position to return to the podium for the second straight night but fell out of the position on the final lap. In his place charged his teammate, Kody Kamm. The Polaris rider was swapping spots with Logan Christian for fourth most of the race but got free as the clock ran out. He used the final two laps to get into podium position, his first of the year.

“I thought I was in fourth behind Logan and going for third that whole entire time,” said Kamm. “It just gave me that extra push to pass him and it turned out we were fourth and fifth the entire time. So, he was not able to come up here on the podium with me, but I was able to push super hard the whole time.”

By the time the Pro Lite final finished up on Saturday night, the milder temperatures and higher visibility that ruled the day had completely vanished. Instead, the mercury was dropping by the minute and the cold air mixed with the man-made snow meant the air was filled with a thick blanket of snow-dust.

The view out front is always better, but even the current points leader Jordan Lebel must have felt like he was stuck in the middle of the pack. Lebel used an outside line off the start to grab the lead. He had Nick Lorenz on his inside, but Lebel was able to put a gap on Lorenz after a few turns. Then, midway through the race a red flag came out, causing the field to bunch back up and go through a single-file restart. While Lebel was able to retain his lead, it did cause a moment of pause before the Ski-Doo rider got out front and motored to his fourth straight win.

“The first start I had to start from the outside and I just kept it there,” said Lebel. “On the second start they (groomed) the track after we stopped so I didn’t know where to go. I just kept my line from before the stop and it was not good at all. Nick almost got me, but I managed to just keep it there and it went good.”

Lorenz came into the night as the number one qualifier thanks to great starts that led to a pair of heat race wins. That success carried over into the final as Lorenz used another pair of good starts to push Lebel before cruising to his second podium of the weekend, a second and his third straight trip to victory lane.

“We went to work hard last Monday doing some hole shot testing and, you know, that was a huge part of it,” said Lorenz. “I ripped so many starts this week and I swept both of my heats, both days, and just had really good finals.”

Taylor Cole’s progression continues to rise to the front of the field. The past Pro Lite winner put together an inspired ride in the final. The Polaris rider had an early showdown with Lukas Johansson that saw the two dice back and forth for several laps. But Cole took control of that battle, and the third position, as he raced to his first podium of the season.

“The visibility was so hard, especially at the restart,” said Cole, “You have two sleds just directly in front of you, just giving you roost straight away. Then you have people coming up hot behind you. It was just like: Protect. Protect. Protect and try to stay in third.”

PRO WOMEN: After winning round three’s final on Friday night, Inanna Hauger put herself in position to win two-in-a-row, but Holeshot Hauger had her hands full with a motivated Malene Cottew on Saturday night.

Cottew had a solid strat and had overtaken Hauger by the time the pack came around and crossed the finish line for the first time. From there, Cottew was on a different level, clicking off lap after lap in the lead for her first win since round one in Shakopee.

Hauger would keep a grip on the second position as she now has four straight podiums to start the season and will keep the points lead heading into Deadwood. Round two winner Taven Woodie finished third.

PRO SNOWBIKE: Things were a little calmer in the Pro Snowbike class on Saturday and defending champion Jesse Kirchmeyer put together two complete moto’s on his way to the overall win.

Kirchmeyer won both moto’s on Saturday for the overall. He had a good start in moto one on his way to the win but had to work through some early traffic in the second moto before sweeping the races.

Friday night’s overall winner Troy Horbaty went 2-2 for second overall. He and Yanik Boucher were dicing back and forth in both moto’s before Horbaty was able to pull away. Boucher went 3-3 for third overall.

PRO AM PLUS 30: Andy Lieders continues to keep the Pro AM Plus 30 field in his roost as the Polaris rider cruised to his second class win of the 2022 season. Lieders grabbed the hole shot and found clean air as he powered his way around the Dubuque track.

Bellerive Maxime and Seth Engle settled into a nice mid-race battle, with the two riders swapping ski’s and positioning before Maxime found a better line and cruised to second. Engle would hold down the third and final podium spot.

FXR SPORT: Adam Ashline is a young man on a mission in 2022. The Ski-Doo driver has been nearly perfect in the FXR Sport class this season. After finishing second in the opening round, Ashline has now won three straight finals thanks to a spectacular ride on Saturday night in Iowa.

Quebec’s Jeremy Beaulieu put it all together to challenge Ashline before finishing second, his first podium this year. Zac Farmer had a successful weekend of racing in Iowa as the Medford, Wis. resident finished third, his second podium the weekend.

SPORT LITE: Cameron Cole was the ninth qualifier for Saturday’s Sport Lite final, but he grabbed a fistful of throttle and jumped all over the field for his second win of the season. Cole was clear of an incident that caught up several sleds and switched up the field behind him. Jan Even Romsdal went back-to-back in podium finishes in Iowa as he crossed the line in second. Kenny Goike finished third.

JR GIRLS 9-13: Kendal Rose picked up where she left off in Minnesota by winning the Junior Girls 9-13 final in Iowa. Rose went wire-to-wire for her second win of the season. She was challenged by Victoria Dillon (2nd) and Cecily Bernaiche (3rd), both of whom nabbed a podium for the second weekend in a row.

JR 10-13: Kamden Duffy worked his way into the lead on lap three of the Junior 10-13 final and held off a Brady Freeland at the line for his first win of the season. Freeland missed out on his first win of the year by .89 of a second. Colin Taggert notched his second straight podium finish in third.

120 CHAMP: It was three wide racing early in the Champ 120 final, but Avery Hemmer was able to clear her way through the chaos and pick up her second class win of the season. Jackson Houkom put in a late charge to challenge Hemmer but came up just short at the line to finish in second. Tavin Knudson finished third.

TRANSITION 8-10: Riley Johnson now has three wins in the first four races of the Transition 8-10 class. Johnson had a great battle with round two winner Rylan Nelson, who finished second. Ryder Hayes and Tyson Kielman were bar-to-bar crossing the finishing line, with Hayes notching the final podium spot in third.

STOCK 200: Ryan Shimanski had back-to-back wins in Iowa as the Stock 200 points leader has now found the podium in all four races this season. Trenton Peterson was able to pick up a pair of seconds and Gvanni D’Antonio made it to the podium for the first time this season in third.

JR 14-15: Isaac Peterson will leave Iowa with a pair of wins on the score sheet. Peterson grabbed the lead on lap four and pulled from Thor David Rasmus for the win. Rasmus was uncontested for the runner-up spot and Deegan Johnson finished third.

TRANSITION 9-13: Colin Taggert made his first trip to the podium in 2021 extra special by capturing his first Transition 9-13 class win of the season. Brandon Martinson also notched his firsts podium by finishing second and holding off another first time podium winner Trenton Hilmerson, who finished third.