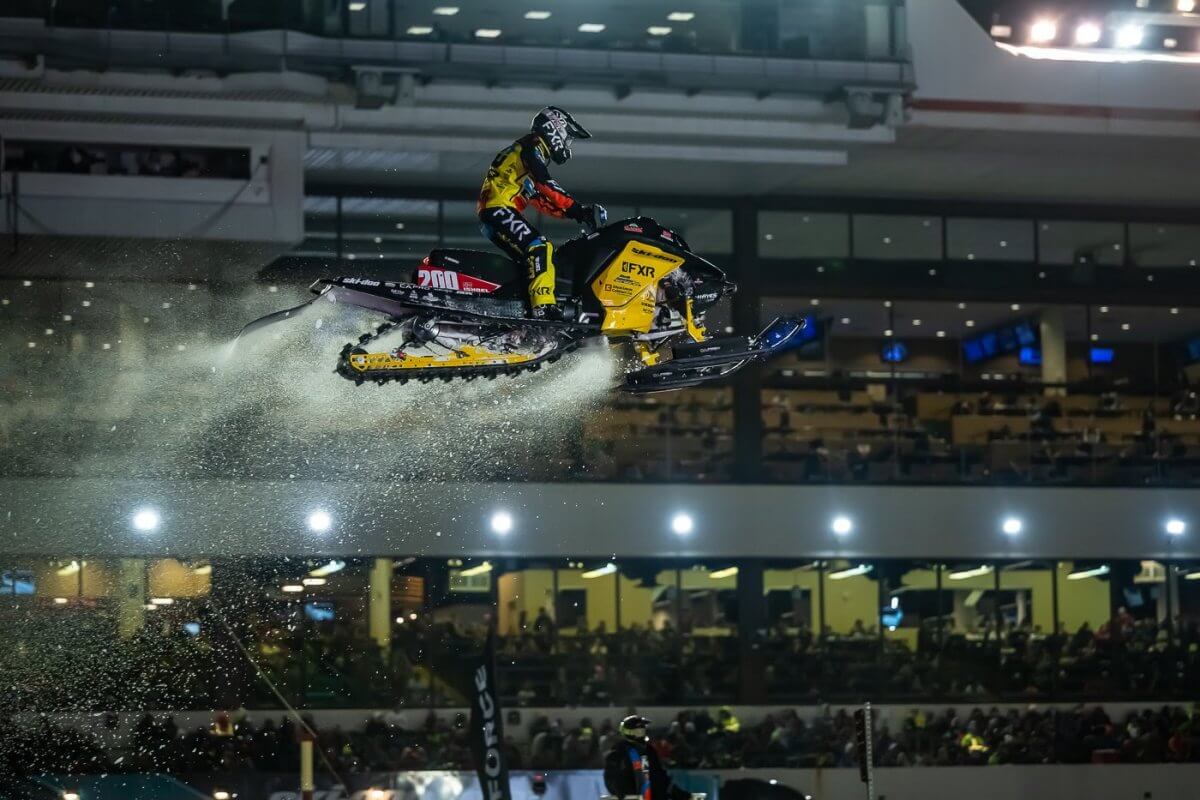 Round three of the ISOC national snocross tour brought a potentially ominous beginning to the new year.  After qualifying second and third in his heat races, a first turn pileup at the start of Friday night’s Pro final relegated Elias Ishoel to last place, over one lap down to the leader. Ishoel was able to rally back to 11th place and look ahead to Saturday’s action.

While fast starts did not come easy on day two, the end result was much better. Ishoel worked his way forward from the seventh spot and picked off riders at the rate of almost one per lap. Although the tight and extremely rough course held one preferred line for most of the night, Elias was able to race into a third place podium finish in the closing laps and leave Canterbury Park with his point lead narrowed but still intact.

Marcus Ogemar (#58) was on fire during Friday qualifying going 1-1 in his Pro Lite heat races. With the number one gate pick in the final, Ogemar raced to an early lead before battling with rivals Ryley Bester and Jordan Lebel. Ogemar would finish just off the box equaling his season high finish in fourth.

On Saturday, Marcus secured another top five in the main event in fifth and now sits fourth overall with momentum on his side.

Emeric Legendre (#144) scored a career best fifth place finish in Friday’s round 3 Pro Lite final. Legendre continues to learn the pace of the class as a rookie who sat out all of last season and has shown steady improvement and growing confidence each time he goes on track.

On Saturday, he wrapped up the weekend with another top 10 in seventh and heads into rounds 5 and 6 in two weeks sitting seventh overall among a very competitive field of racers.

Crayden Dillon (#206) has been one of the most impressive racers on the tour this season, sweeping a race weekend for the second straight time and remaining undefeated in the Sport class.  Dillon finished 2-1 and 2-1 in his daily qualifying and has shown the rare ability to race forward in the pack when needed.

Crayden pulled a massive holeshot to run away with Friday’s final and then put his head down to come from a fifth place start and move into the lead midway through Saturday’s main event.

After a prolonged start to the year, the team will now get into a bit of a rhythm as we prepare for the fan-favorite bullring in Deadwood, South Dakota on January 27-28.

You can follow the team all year on our social media links below and catch all of the on track action through the Flo Racing streaming service at FloRacing.