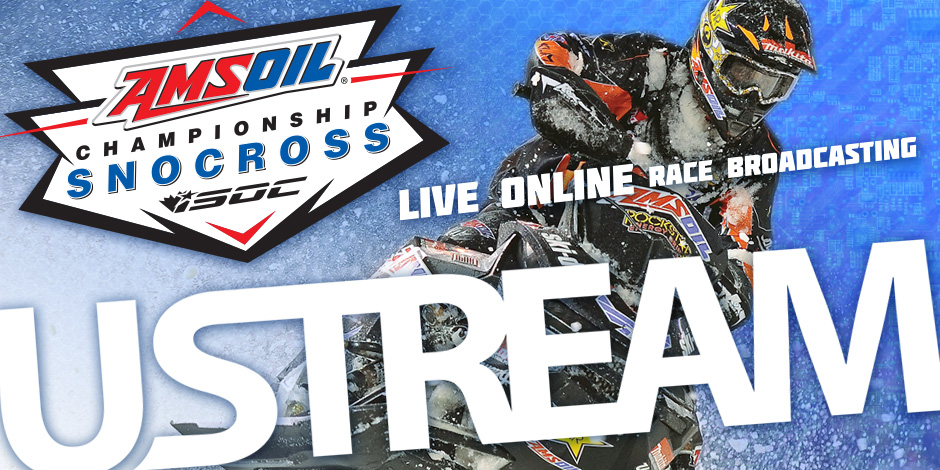 All ISOC AMSOIL Championship Snocross Series’ events will be ‘Live’ on the popular Ustream webcast, produced by Long Haul Productions

The agreement will return the production of the globally-popular online program to ISOC’s in-house media component – Long Haul Productions based out of Albertville, Minn.

“Last year when we were featured on Ustream we saw a huge increase in viewership. So it was crucial that we not only continue to work with Ustream, but to improve on last year,” said Carl Schubitzke, Director of Operations and Racing for ISOC.

New to the ISOC webcast production this year will be an actual television broadcast set purchased from FOX Sports. “We’re taking this up to an entirely new level of professionalism,” added Schubitzke. “We’ll have full pre-race program production followed by our opening ceremonies to the best snowmobile racing in the world. Everyone at ISOC is really fired up with our new direction with the webcast at every round of the AMSOIL Championship Snocross Series this year.”

And best of all – it’s absolutely free to fans of ACSS.

“Ustream is thrilled to partner with ISOC to stream the 2012-2013 Amsoil Championship Snocross Series and distribute them to our vast global reach of 57M UVM” says Wayne Sieve, Vice President, Sports Business Development. “This partnership allows Ustream to provide Snocross fans free LIVE streaming access to watch their favorite Snowmobile racers and interact with fans alike throughout the championship.”

Featured on both Ustream’s home page and sport page every Friday and Saturday night will prove to be a windfall in terms of viewership on the Internet for the ACSS. Bottom line, according to Schubitzke: “Ustream loves our content and wants to become a bigger partner by marketing our events with their resources as well. So not only is this a big deal for ISOC and all of its members, it’s also a big deal for the sport itself.”

About Ustream
Ustream Inc. is the leader in live, social video streaming. The interactive platform connects broadcasters and viewers of unlimited size through innovative technology including co-hosting video features, IRC chat, Facebook, and Twitter. Ustream’s free and premium solutions allow any broadcaster to create their own customizable channel with robust social and notification features to enhance visibility and virility across multiple platforms. In addition to activating the embeddable features on external websites, users are able to broadcast and view content while interacting in real-time directly from mobile phone devices, tablets, streaming players, smart TVs, and more. The company attracts millions of users ranging from music artists, celebrities, politicians, athletes, corporate executives, animal enthusiasts and gamers, all which have contributed to Ustream’s Guinness World Record for the “Most Content Ingested by An Online Video Service.” For more information, visit www.ustream.com and follow Ustream’s socials: Twitter (@Ustream); Facebook (facebook.com/Ustream).