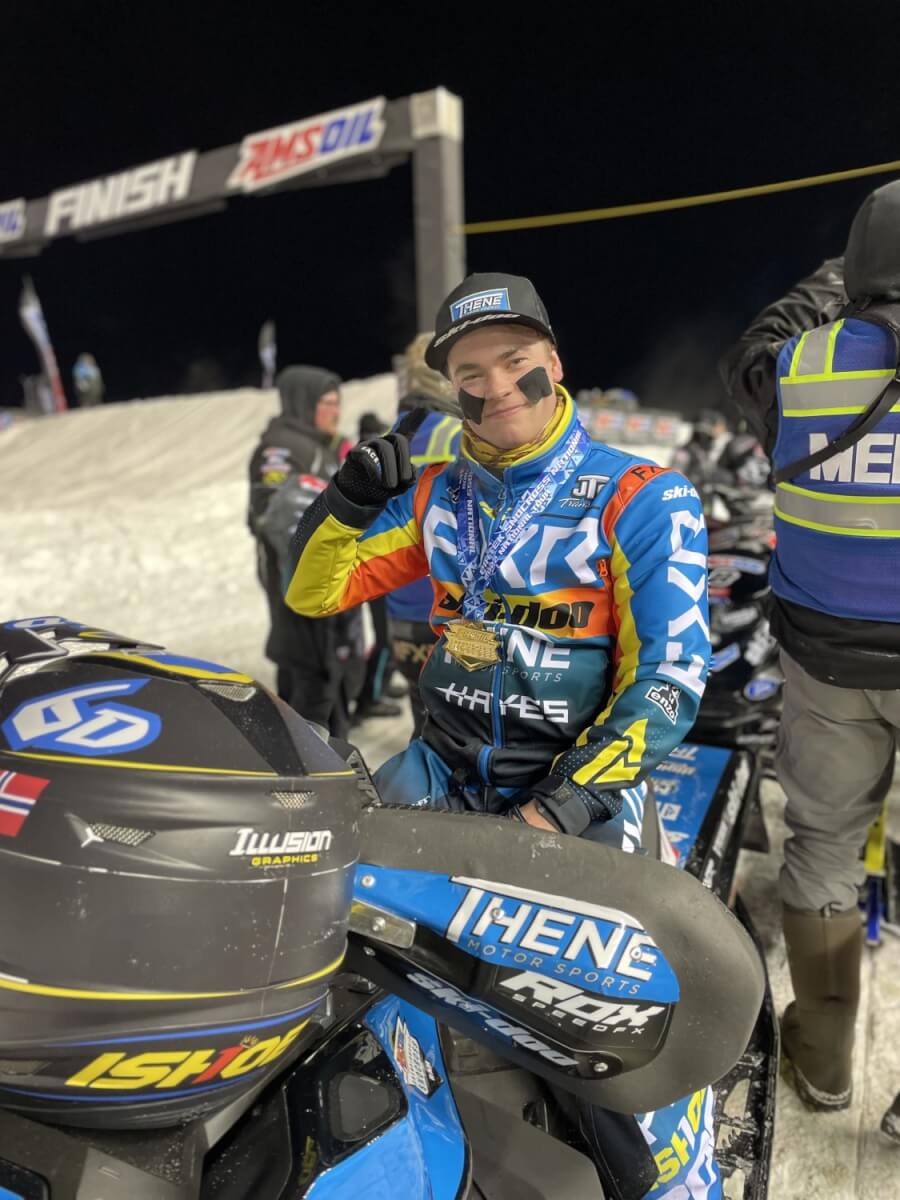 Shakopee, Minn. ~ With a New Year comes a new snocross season as the 2022 version of AMSOIL Championship Snocross got underway under the lights of Canterbury Park in Shakopee, Minn.

The season opener lived up to the hype. Both fans and racers were getting their first look at their favorite riders, with many of them making a midsummer moving teams or jumping to a new brand or back to an old favorite.

When the snow-dust settled on a night that saw temperatures drop below zero, it was a mix of the old and new taking the headlines at the season opener.

After three straight championships, the seas of change offered up a tidal wave of news late this summer regarding current title holder Elias Ishoel. The Champ was changing teams and the voices of the naysayers grew louder with every passing day.

The question of whether or not Ishoel could win with his new Ski-Doo Thene Motorsports program was quickly answered on the opening night of the new season. Ishoel didn’t win a heat race on Friday night, but he only won six last season on his way to winning eleven finals. That formula worked so well with the old guard, he stuck with it to start 2022.

Hunter Patenaude (Ski-Doo) and Kody Kamm (Polaris) each won two qualifiers. They carried that momentum over to the final, where they came out of the first turn 1-2, with Patenaude grabbing the advantage and leaving Kamm to deal with Ishoel and Polaris’ Emil Harr. It was an intense battle for the runner-up spot, but as the clock ticked down, Ishoel found another gear, getting past Kamm and eventually past the race leader. It was another win for the defending champion, and one he seemed to find a little extra gratification in accomplishing.

Patenaude was never really challenged after he relinquished the lead to Ishoel. But a pair of heat wins and a runner-up finish means he leaves day one with the points lead, and a lot of confidence heading into a jam-packed season.

For Harr, he was a steady challenger to the leaders all night. He routinely pressured whoever was riding in front of him and was able to get past Kamm halfway through the race. It’s a strong start for Harr, who finished fifth overall in 2021 thanks to a strong second half of the season.

Kamm would finish fifth and Kyle Pallin was able to work his way from a tenth place start to finish fifth. 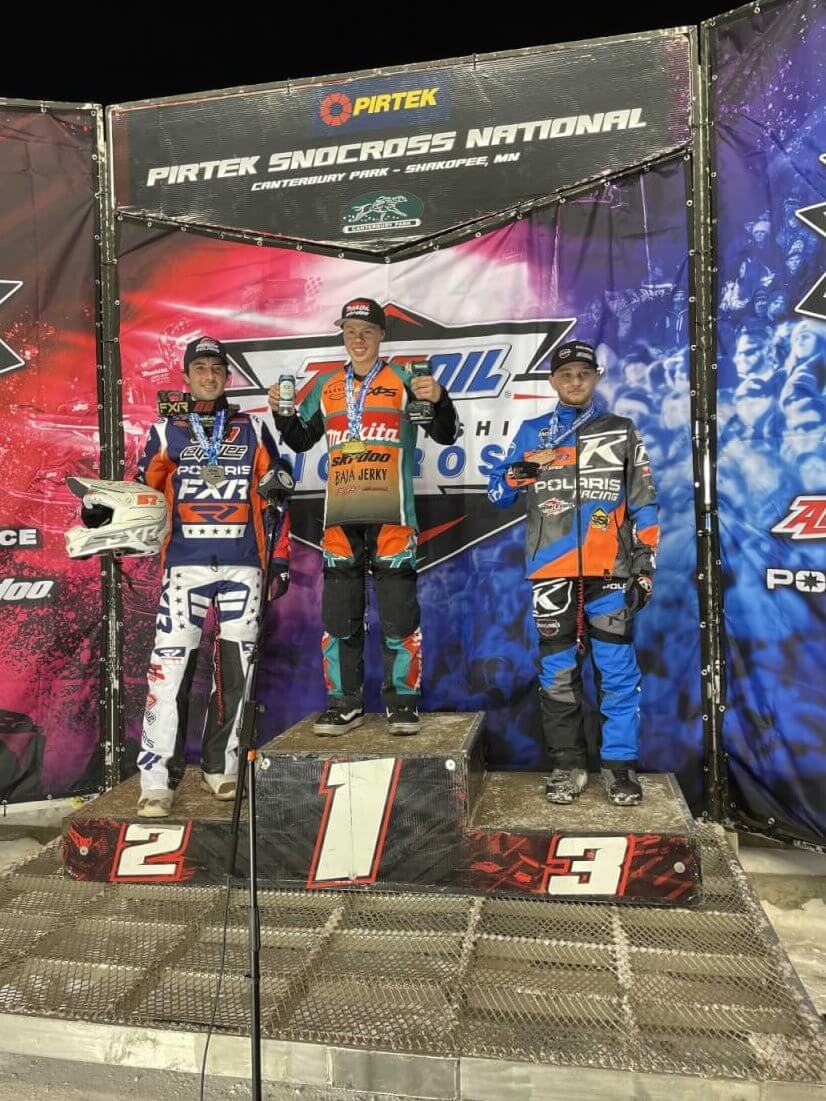 Take the series defending Rookie of the Year and Pro Lite title contender, add in a 34-year veteran who won the Pro 30 Plus class a year ago and mix in a rookie making his Pro Lite debut and it all adds up to one of the most exciting races the sport has witnessed.

The Pro Lite went to an eight minute plus two lap format this season, similar to what the Pro class adopted in 2021. That meant a longer racer and more chances for racers. Alread had his best chance from the start after grabbing the hole shot and wrestling with Lukas Johansson for the lead. He would hold it until two laps remained, when he was passed by rookie Jordan Lebel.

Lebel’s first start in the pro ranks didn’t indicate the success that he would find at the end of the race. He got pinched off the start, coming through the front straight in eighth, and had to deal with a competitive field that didn’t allow the rookie to get into the top four until midway through the race. Getting on the podium was still a long-shot as both Johansson and Andy Lieders, who ran several Pro races in 2021, were swapping positions and pressuring Alread for the lead.

Lebel was able to get through the fray and moved into the lead with two laps to go. With the time off the clock, he used the clean air in front of him to extend his lead over Alread and Lieders and cruised to his first career Pro Lite win.

“I had a bad start, and I mean way off the track,” said Lebel. “It was gnarly. it was rough, but I found some good lines and I just made my way up and it went pretty good out there tonight.”

A rookie winning his first race is a big enough storyline to follow, but Lieders story is just as compelling. He has found success at every level and just about every race. So, to see him in Pro Lite isn’t a crazy notion, but he put in an exceptional effort into his craft on Friday. He never let off and kept on the throttle for the duration of the race, finishing second ahead of Alread.

“I kind of just lasted out there,” said Lieders.  “I was kind of surreal, I mean I had two days on my snowmobile before this race. I’m 34 years old and I never imagined I’d be up here with these kids. But let me tell you, your mind is a powerful thing and I just believe l can still do good. I just went out there and had fun.”

Alread may have dropped to third, but it was an exceptional effort put in by the Polaris driver. He entered the event coming off of an illness, and likely ran out of energy during the longer race and extreme cold. The early lead was rewarding and a building block for days to come.

“Yeah, that was awesome to pull,” said Alread after the race. “It was a tough race though, that’s for sure. I was able to do any riding this week. I was sick all week, but it definitely was a tough race for sure. But I hope I can do that again tomorrow and hopefully be able to push the whole race.”

Malene Cottew (Andersen) took advantage of a restart after a red flag was brought out just after the start of the final. Cottew would have to get around Inanna Hauger, who pulled another hole shot, something she has been doing with regularity over the past several events. Cottew would push into the lead, and power her Ski-Doo to the win.

It marks the fourth win in the past five races for Cottew, whose championship battle with Megan Brodeur came down to the final weekend a year ago. Brodeur was not at the opening round, and that opened the door up for Hauger, who capitalized on her strong start to finish second. Naeli Lebel held off Makenna Kleiman for third.

PRO SNOWBIKE: The Cowboy dusted off his snow boots and picked up where he left off last season with another win in the growing Pro Snowbike class. Fourteen riders lined up for the two-moto format, but it was Jesse Kirchmeyer sitting atop the field once again.

After winning the first moto, Kirchmeyer had to chase down Troy Horbaty, who pulled a wicked hole shot and led the defending champ around the track for the first two laps. But Kirchmeyer found his groove and took over the lead with four laps to go.  Horbaty went 3-2 to finish second overall. Keaton Ward notched a fourth place finish in the first moto and a third in the second race to finish third overall.

SPORT: It took Eric Downs six rounds to pick up his only win of the 2021 season. It took one night for Jordan, Minn. native to pick up a victory in 2022. The Polaris rider worked his way into the lead for good on just the second lap.

He would have to hold off a hard-charging Adam Ashline, who started ninth, worked his way through the traffic and found himself in second on the last lap. Domenic Hegman finished third after making the move into Sport after winning two Jr. class titles in 2021.

Gavin Love backed up a strong day of qualifying by winning the Sport Lite final on Friday night. Love led from start to finish for the opening round win. Daniel Wohlers and William Cote would battle it out for second, with Wohlers holding the runner-up spot at the line.

Ryan Shimanski (#195) roared into the new season with a winning attitude. The young driver took home the Stock 200 (6-12) victory on Friday night. Trenton Peterson finished second ahead of Gvanni D’Antonio.

Kenny Goike (405) was the opening round winner in Jr. 14-15. He took over the lead with two laps to go, holding off Isaac Peterson and Lawrence Eeg for the win.

Tanner Johnson dropped into the lead on lap three of the Transition 9-13 final and held on for the win. Calden Pflipsen finished second ahead of Brody Srsen.