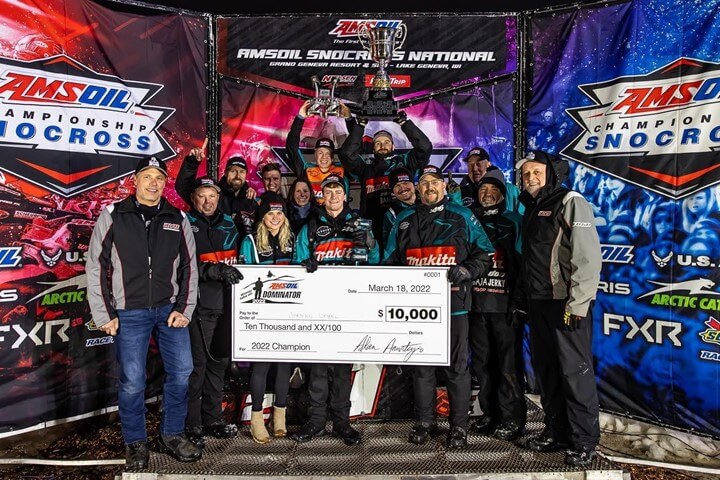 Here it is, one of the most anticipated race weekends of the season. The show began Friday night with a rainy evening of qualifiers for the Dominator on the ski slopes at Grand Geneva. A chance for Pro and Pro Lite riders to get a shot at winning $10,000!

Both Frank and Jordan made it through their evening qualifiers without any trouble. Wet and windy, the riders lined up for the Dominator Final. Pro Lite started in the front and Pro in the back. Jordan came out of the opening scrum in second, Francis hanging out a little further back. Jordan was able to take the lead and secure a cushion up front with two past Dominator winning Pro riders on the hunt. Realizing his teammate up front, Frank wisely dropped to the back of the field to save himself and equipment for the two remaining days of racing. Lebel was able to go the distance and would later be seen standing atop the box with an oversized check and the Dominator trophy!

With the fun out of the way, Saturday was time to go racing for championship points. To start, Lebel took P3 in his first qualifier; he would double down on that result in his second round. Frank was quick on the throttle pulling a hole shot and never looking back in his opening round. His second qualifier would also have a promising result, P2.

The team had extra moral support in the stands as the crew from Baja Jerky came out to support the team for round 13! In his Final, Jordan had a textbook start and in his own words, “I was wide open, and I just held it there”. He took an early lead and was never tested. After the podium celebration died down, the Pro Final was underway. Consumed in the chaos, Frank descended down the first downhill rhythm section in a top ten position. When the field was sorted out, he assumed P7 where he would finish out the race.

Sunday morning action was paired with the traditional sunny Geneva weather making a fashionably late appearance. In Round 1, the hills of Grand Geneva dictated the five eleven would be towed back to the trailer for repair. Unphased, Jordan went out and put a beatdown on the field in his second heat. In Frank’s first heat, the officials deemed he may have been a little too eager at the starting line. After dropping to the back of the field, two twenty would come across the line in sixth. A little more patient on the start, Frank put up a solid P3 effort in his second round.

After making quick work of his LCQ, Jordan lined up in the back row for his Pro Lite Final. On the first lap Jordan would be slotted in sixth with a 7.5 second gap between him and the leader. On the ninth lap he would take command of the lead, and complete the hat trick for the weekend! It was now Frank’s turn to tackle the track. After coming out of the first turn in fourth, the top four riders separated themselves from the field. The track was rough, and Frank waited for his chance to take advantage of a mistake from one of his fellow competitors. An opportunity presented itself on lap five when the leader was suddenly out of the race, putting Frank in podium position! With the field separated and a comfortable gap behind him, Frank rode his Skidoo to a solid third place finish.

The team was all smiles as they packed up the trailer to get ready for the season finale at Cannonsburg Ski Resort in Michigan next weekend. Thank you to all our sponsors for their support!