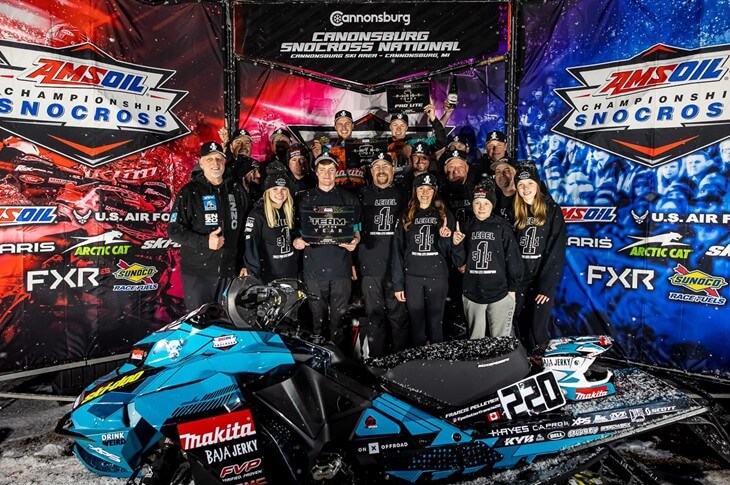 The Team arrived for the Season Finale at the Cannonsburg Ski Area with some good momentum after last weekend’s performance. Jordan Lebel would be looking to solidify his points championship, and Francis Pelletier was in the thick of the Pro points battle.

Friday’s action started with both riders putting down blistering times in their practice sessions. Jordan started his qualifying with a second place finish and would copy that result in his second heat. Francis finished third in his opening heat and P6 after an eventful round two of Pro qualifying.

Jordan lined up as the fourth qualifier in his final, looking to lock up his points championship. A few laps into the race Lebel attempted to pass for the lead in the downhill rhythm section. Speed and style were pushed to their limits, ending the race abruptly for Jordan. He would finish P14 as he spent the rest of the race a lap down. Fortunately, his points lead was still well intact. Now Pelletier lined up for his final race of the evening. After finding some fast lines and charging for a top five position, Frank was the victim of bad luck and had to retire early due to a mechanical issue. Not the day the team was looking for, but the crew would rise to the occasion after Friday’s test of character.

The final round of the ISOC Snocross season was finally here, but the day would go on without Jordan in the field. After his crash the previous night, it was in Jordan’s best interest to not compete in round 16. It was a tough decision, but the team agreed it was the right call. Not exactly how he wanted the season to end, but after taking a final count it was official that Jordan Lebel would be the 2022 Pro Lite Champion! He finished with 10 wins plus his dominator victory in Lake Geneva! An unbelievable season that will be remembered by fans and competitors alike.

For Frank, the season was far from over. In his qualifying rounds he would tally P6 and P4 trying to find some new lines in preparation for the last final. In almost storybook fashion, Frank grabbed the holeshot and took it all the way to the checkered flags, being the final winner of 2022! Frank would have 5 Holeshots on the year, most of the Pro class, and the second most Pro wins, with four total.

After his win, Francis pulled his 220 Makita Skidoo up to the podium, thanking and congratulating sponsors and fellow competitors. With the season over, Jordan Lebel is the 2022 Pro Lite Champion, and Francis Pelletier finished 3rd in the 2022 Pro Championship! The team gathered round and let the champagne corks fly!

Among other reasons to celebrate were being recognized for two ISOC Specialty Awards. Warnert Racing was voted “Team of the Year” and Kyle Sackett “Mechanic of the Year”, thank you to all who voted!

Warnert Racing would like to thank Skidoo, Makita, all our sponsors and fans for helping us achieve one of our best seasons on record! Also, a special thank you to the ISOC crew for their hard work, and to all the other teams and riders for making this sport as fun and competitive as possible. Finally, we would like to recognize the hard work the mechanics and riders put in this year and the sacrifices they made being away from friends and family. A true team effort. -Francis Pelletier, Jordan Lebel, Andrew McLean, Nate McConnell, Kyle Sackett, Cody Fox, Brendon Uilk, Steve Houle, Gilles Thiboult, Tim Zachariah, Ron Warnert, Mark Warnert, and Thomas Warnert.

We look forward to building off this year’s success and are excited for what the 2023 season will bring!