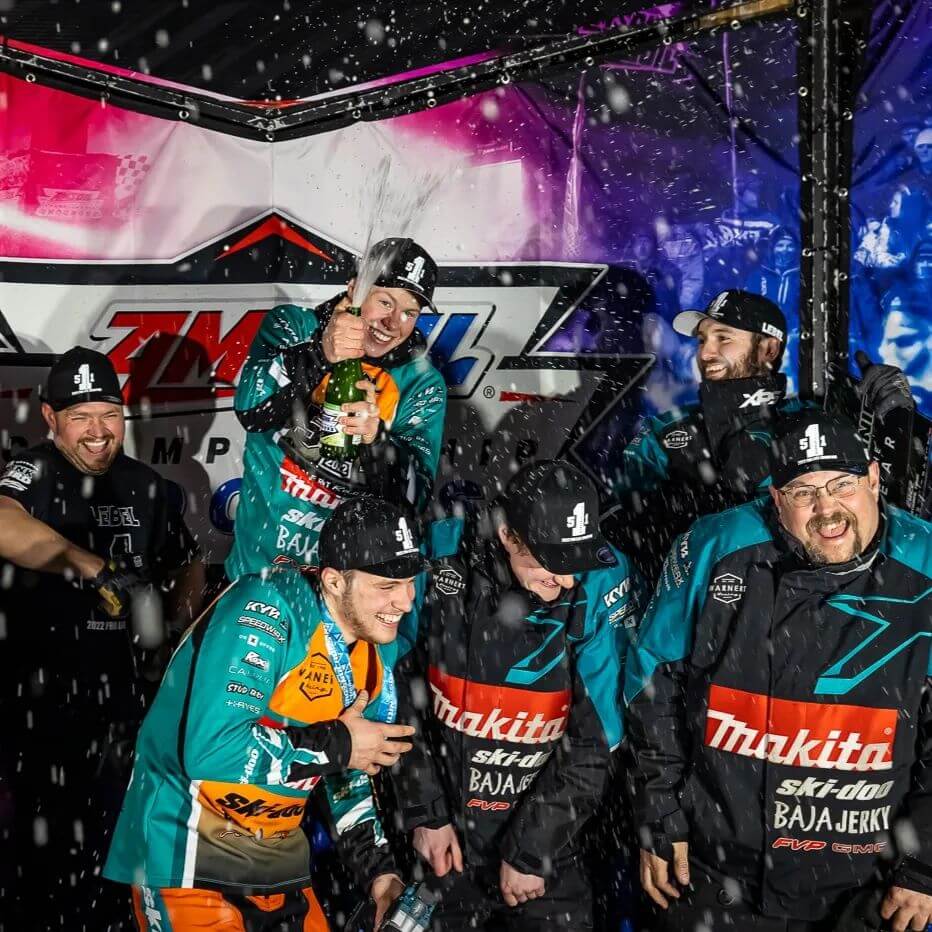 St. Cloud, MN (September 8, 2022) – Last season was nothing short of dominant, bringing home a top 3 Pro
points finish, a Pro Lite Championship, and being nominated as “Team of the Year ” by fans and peers. Warnert
Racing is proud to announce the return of Pro rider Francis Pelletier and defending Pro Lite Champion Jordan
Lebel. In addition, the Makita Skidoo Factory program will include Naeli Lebel and Dylan Lebel for the 2022 –
2023 ISOC Snocross season.

Francis Pelletier will continue his Pro campaign after finishing 3rd last season in Pro points despite missing a round due to injury. He finished the year with 4 wins and 5 Holeshots, most of all Pros. Francis is looking forward to the season, saying, “I worked really hard this summer, and now look forward to racing hard this winter.” He will be accompanied by veteran mechanic Nate McConnell, who is one of the most tenured members of Warnert Racing.

Jordan Lebel will be returning to Pro Lite to defend his Championship. Jordan boasted some impressive stats in pursuit of his title including 10 wins, and becoming the 3rd rider from Warnert Racing to win the Amsoil Dominator! Regarding this season, “I am really excited to be back with the team! Last year was great, but we expect to be even better this year.” Kyle Sackett is also returning as the mechanic for Lebel, who was named ISOC’s “Mechanic of the Year” last season.

The newest Pro rider for Warnert Racing is Naeli Lebel. She debuted as a Pro in the Women’s class last
season, notching two podiums in the process. Naeli finished 6th in the Pro Women’s points, and had numerous
top 5 finishes. She also won the “Most Improved Rider” award from ISOC. “I am so happy and feel so lucky to
be part of the team. I am excited for the upcoming season, and am honored to be wearing the Warnert colors!” said Naeli about joining Warnert Racing.

Dylan Lebel will be the youngest addition to the stacked lineup. Regarding his new opportunity, “I am really excited to be part of the team for my first year in Sport Lite, I can’t wait to start working with the team!” Dylan will have a heavy workload racing in Junior 14 – 15, Junior 16 – 17, and Sport Lite. Last season Dylan had 6 wins in Junior 10 – 13 and Transition 9 – 13. He finished 4th and 5th respectively despite not racing a full schedule.

“We have been doing this for twenty three seasons, and we wouldn’t be here without our support from Skidoo.
They have been with us since day one, and we are proud to be a consistent presence for Skidoo throughout
the years. Looking forward, we are very excited about the group we have returning from last year. The synergy
within this team between our riders, mechanics, and sponsors is undeniable. Obviously the Lebel’s are a very
talented family of racers, so it made perfect sense to bring Naeli and Dylan on board. The expansion into other
classes is something we have been looking at, and now we have the right people to make it happen.” said team owner Mark Warnert.

In addition, we are thrilled for another season having Makita Power Tools as our title sponsor. “In championship
snocross, Warnert Racing is consistently on the podium and has the hardware to prove it,” said Brent Withey,
vice president, brand marketing, Makita U.S.A., Inc. “After a strong season last year the team is coming back
at full strength, so as a returning sponsor we can’t wait to get back to the races with the loyal fans who
consistently come out in support. Makita Tools will be there, in the race shop and in the pits on cold race days,
keeping this team on track and in a position to win.” We are fortunate to have this partnership with Makita, their
unwavering support has played a key role in the success of our team since their involvement.

Warnert Racing will continue to be managed by Team Manager Andrew McLean, overseeing all day to day
operations. We will also maintain our close relationships with Steve Houle of Speedwerx USA for clutching and
performance, and ENZO KYB as our suspension specialists.

The return of Francis and Jordan, along with the additions of Naeli and Dylan are a great foundation to build on
for a successful season. We are extremely excited for what the future holds and can not wait for winter! Be sure to stay up to date on all things Warnert Racing by following us on Instagram and Facebook, or by going
to our website, www.warnertracing.com

About Warnert Racing
Hill City, Minnesota-based Warnert Racing is the premier team in professional snocross racing and one of the sport’s pioneering “superteams.” The team is modeled after the most successful auto racing operations, managing the day-to-day operations of two snocross racers, including sponsorship, transportation, marketing, sled set-up, driver development and technology development.