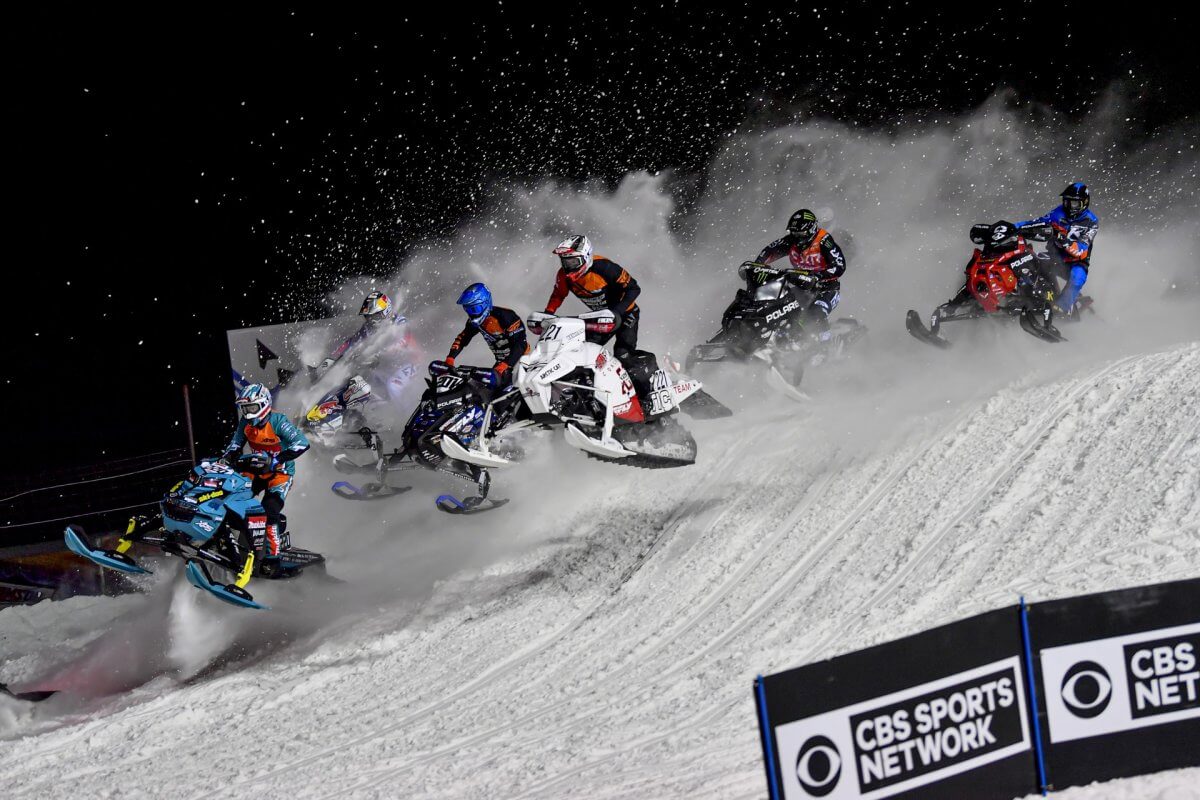 The 2022-2023 AMSOIL Championship Snocross title chase commences to West Fargo, ND. The world’s greatest Snocross racers convene at the Red River Valley Speedway for the third visit in series history. A staple market to the tour, ACS has been visiting the Fargo area for over a decade. For the first time in series history, Fargo will host the opening weekend.

The three-day snowmobile racing spectacular will kick off Friday and features the $10,000-to-win AMSOIL Dominator race. The fan-favorite head-to-head competition features PRO and PRO LITE divisions. Friday’s portion of the weekend is free to the public. All Finish Concrete and KPH, Inc. have stepped up to provide an additional $30,000 in bonus money throughout the course of the weekend. (Read more about the bonus money here.)

Red River Valley Speedway is best known for its dirt track racing since 1967 (formerly known as Red River Speedway). In 2010, the 1/2 mile dirt track was shortened to 3/8 mile in length. The venue is home to IMCA Modifieds, Stock Cars, SportMods, Hobby Stocks, Legends, and Sprint Car racing, including the NOS Energy Drink World of Outlaws.

In 2021, Amsoil Championship Snocross made its inaugural visit to the speedway after previously having the Fargo event hosted by Buffalo River Race Park. The venue also serves as a professional Snocross practice facility for all ages during the winter months. It is home to the Two Eighty Six Sno Series, a youth snowmobile racing circuit. These events are organized and promoted by Chad Ohnstad and his team. Since springing onto the Snocross scene, Ohnstad (Team Co-Owner, All Finish Racing, and Owner, All Finish Concrete) quickly put plans into action to invest in the future of the sport.

The large grandstand provides optimal viewing of the expansive course. Indoor vending and concessions below the grandstands are available for fans to warm up while not missing a beat thanks to viewing monitors. The track layout will be similar to last year’s course with a few minor changes. The 2022 course was one of the fastest and most expansive on the tour.

The 2022 ACS campaign saw Elias Ishoel continue his charge up the all-time wins list. The “Viking Rocket” secured his fourth-straight Pro championship last season thanks in large part to his class-leading nine wins. It was another spectacular year for the formidable Ski-Doo driver. Those wins brought his career total to 34, matching one of the all-time greats, Ross Martin. Just as impressive is that Ishoel has made it on the podium 46 times in the past 61 races. Last season, Ishoel put the hammer down over the final two weekends to clinch his fourth title. The Thene Motorsports driver swept the weekend in Lake Geneva before notching a win in round 15 and a second place finish in the season finale in Michigan.

One of the biggest headlines to come from the off-season is the return of multi-time Pro class winner Petter Narsa. Narsa had formerly retired from racing following the 2019 season. He returns to the US under the leadership of esteemed veteran mechanic Levi Ensrud. The duo will operate out of newly formed Skogquist Race Team Ski-Doo out of Ramsey, MN. The two previously worked together at Hentges Racing Polaris up until Narsa’s retirement in 2019.

Pro class sophomore in 2022, Hunter Patenaude put forth a momentous season to earn him the runner-up position. The Hartland, VT racer earned his first-career AMSOIL Pro win that season at ERX Motor Park and even carried the red plates for a stint. Patenaude has been hard at work preparing at his home in Phoenix, AZ. The backdrop of his pre-season training is unconventional for most Snowmobile racers.

There was no Pro racer more dominant in the holeshot category than Warnert Racing’s Francis Pelletier. The Saint-Félicien, QC star amassed an impressive four wins including one weekend sweep in Dubuque. Since the start of his Pro campaign in 2021, Pelletier has not ended the season outside of the top-3.

Native to the NW Minnesota corridor, a fan favorite to the Fargo market is Fertile, MN’s Logan Christian. Christian holds one of the longest standing careers in the current AMSOIL Pro class and has family history deeply rooted in snowmobile racing. He embarks on his second season with Scheuring Speed Sports.

ACS warmly welcomes Pro rookies RJ Roy and Adam West to the circuit. RJ Roy has been racing motocross as well as ACS Canadian affiliate, CSRA Snowcross. The last time fans in the USA had witnessed Roy race stateside was during the 2019 season as one of Judnick Motorsport’s Pro Lite riders.

Unequivocally the rider with a target on his back last season was Chicoutimi, QC’s Jordan Lebel. From an early age, the sky has been the limit for the Ski-Doo racer and the defending Pro Lite titleist continues to build upon a budding career that may soon reach the stars. New to the Warnert Racing lineup this season are his siblings Naeli (Pro Women) and Dylan (Sport Lite and Junior 14-15).

The venerable Boss Racing has joined forces with True North Motorsports to set their sights on a Pro Lite title. The newly formed Arctic Cat operation will be fielding Pro Lite veteran Trent Wittwer along with Dylan Roes and Cale Callan.

New to the circuit full-time will be One Three Motorsports Ski-Doo’s Jeremy Beaulieu. The Quebec racer has made appearances in the past where he has been able to garner podium positions in the up-and-coming divisions. This season will be his Pro Lite debut.

Weeks prior to the 2022 season, Sweden’s Marcus Ogemar was not certain of his future in the sport until an opportunity arose with Thene Motorsports Ski-Doo to return to racing in the US. The opportunity proved fruitful for the multi-time Pro Lite winner. Multiple wins and a number of podiums earned him the runner-up position in the close points championship.

Other Pro Lite winners last season included a trio of Polaris riders including Ryley Bester, Evan Christian, and Nick Lorenz. The Pro Lite class is once again poised to provide what could be some of the marquee moments of the season due to the stacked class roster.

A look back at how the Pro Lites left things last season:

The highly competitive Pro Women division has been one to watch for a number of seasons. Recently, more athletes than ever before are being backed by major teams and are receiving prestigious accolades including the 2022 Fan Favorite Award that went to two-time champ Malene Cottew.

Rising star Ava McCurdy embarks on her third season in the Pro ranks. The former Ice Oval racer will once again return to the ice this season as well as continue to move up the ranks on the snow track.

Tausha Lange returns to racing on a full-time basis after having retired from full-time competition following the 2021 season. This time, with newly-formed West Coast Customs Racing Ski-Doo. Lange makes the leap from Polaris to Ski-Doo and will be assisted by her brother, ice oval racer AJ Lange. Tausha returned to racing towards the end of the 2022 season and it took her little time to tap into the speed at which she had left off.

Runner-up Inanna Hauger had a standout season that included two wins, the first of her career. True to her nickname, “Holeshot Hauger”, Inanna had the winningest holeshot record of the class once again. The collegiate soccer player looks to make another run for the Pro Women title. Hauger was part of the seasons marquee battles alongside Cottew, Taven Woodie, and Makenna Kleiman.

You can watch all 16 rounds of the AMSOIL Championship Snocross season plus the AMSOIL Dominator live on FloRacing with a subscription. For more information on how you can follow along this season, click here. For tickets and event info for the All Finish Concrete Snocross National presented by Kost Materials, click here.