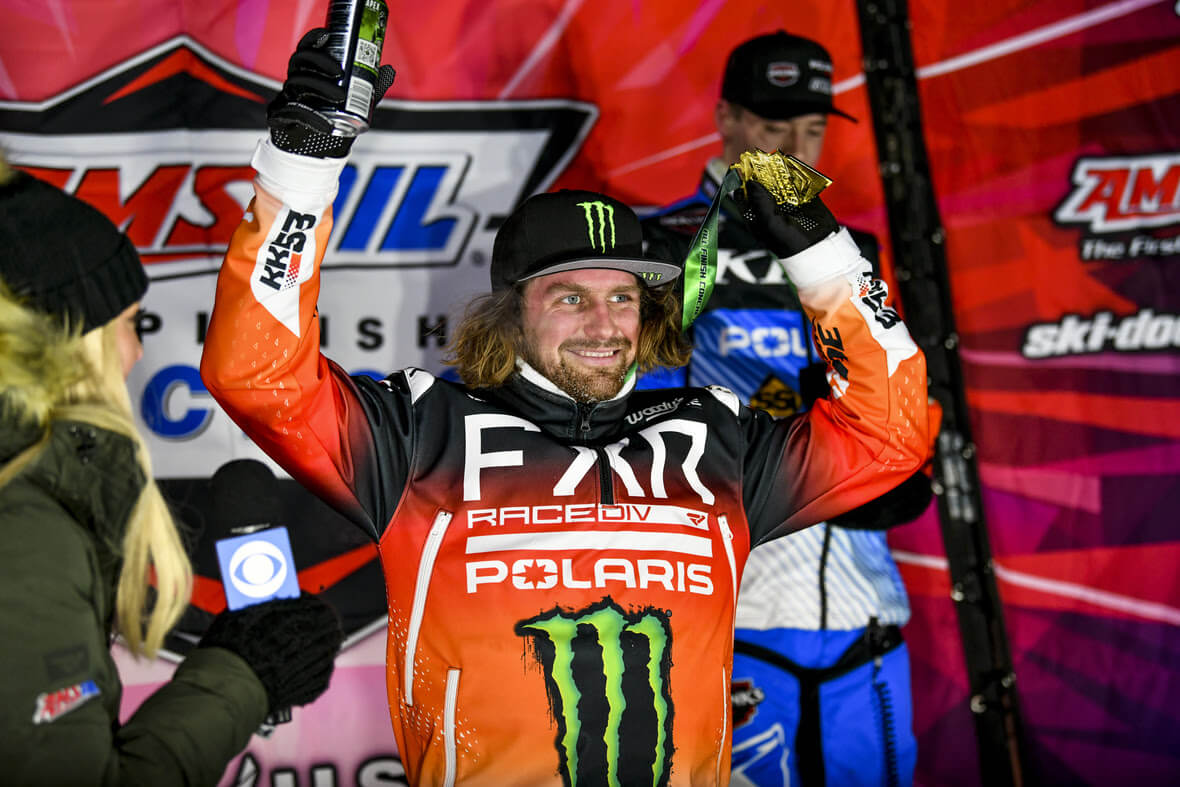 FARGO, N.D. – Hentges Racing’s Kody Kamm dominated at the opening rounds of AMSOIL Championship Snocross, first taking the Dominator win aboard his Polaris 600R on Friday. He then went on to claim the top step of the box for the Round 1 final at Red River Valley Speedway in Fargo, North Dakota, and followed it up with a runner-up finish in the final for Round 2.

Teammate Oskar Norum scored third in the Dominator race and took seventh in the Round 1 final. Unfortunately, he crashed in his second heat race on Sunday and was unable to compete in the Round 2 final.

Dominator
Kamm set the fastest lap during practice and then worked his way through the bracket-style competition to claim the Dominator race win for the second time in his career. In addition to the win, his performance earned him an additional $10,000 purse.

“I made a couple changes this pre-season, and then I went back home for a little bit more time with my family and gave my body a rest,” said Kamm. “I’m super stoked to be here. The new Polaris is an awesome sled, and I’ve just been having a lot of fun this year in pre-season. I’m looking forward to good starts and hard racing all year.”

His teammate, Norum, also battled his way through the head-to-head challenges and was able to claim third on Friday.

Round 1
Kamm went 5-4 in his qualifying races, which positioned him eighth in the lineup for the final. The Wisconsin-based rider pulled the holeshot and immediately began putting a gap on the rest of the field. Less than halfway into the race, he had stretched his lead to more than 7 seconds. He continued to put in a steady ride out front to win is his first points race since the 2018-2019 season.

“I’m so happy with Polaris this year,” said Kamm. “I ripped the start, so that makes racing a lot more fun and easy when you’re out front. But it was actually a pretty stressful race for me getting the holeshot. I didn’t know when they were going to start catching up to me or if they were going to.”

Norum qualified fourth after going 5-1 in the heat races. In the final, he was caught up in a crash off of the start. Norum was able to remount his machine and soon settled into ninth. After a competitor had a mechanical issue, the Swedish rider was able to move into eighth. Before the checkered flag flew, he was able to claim yet another position to cross the line in seventh.

Round 2
After going 2-1 in the heats, Kamm qualified second for Sunday’s final. He once again pulled a great start, immediately moving from second into the lead. From there, he settled into his smooth and flowing rhythm. Although he faced pressure from behind, Kamm held off his competition until the white flag. He remained close and continued his charge, eventually taking second at the checkers.

Norum took the win in his first heat race of the day but crashed in his second heat was unable to compete in the final.

Looking Forward
Kamm now sits second in the Pro class headed into round three in January, while his teammate is in 12th.

“Overall, it was probably one of the most memorable weekends I’ve ever had,” Kamm said. “Lots of emotions were involved in that final race this weekend, and I faced very icy conditions. It was not easy, but I’m thankful for how hard Hentges Racing and Polaris have worked to get my sled the best it can be. I’m looking forward to a very good season!”

To watch the team’s action live and on-demand, subscribe to FloRacing.com. View live timing and scoring at speedhive.mylaps.com

Pro Standings (After Round 2)

About Hentges Racing
Established in 2000, Hentges Racing is a factory Polaris Snocross team that fields two pro class competitors – Kody Kamm of Kenosha, Wisconsin, and Oskar Norum of Bjurholm, Sweden – in the AMSOIL Championship Snocross series. The team is owned by Nate Hentges and headquartered in Shakopee, Minnesota. Visit HentgesRacing.com for more info.