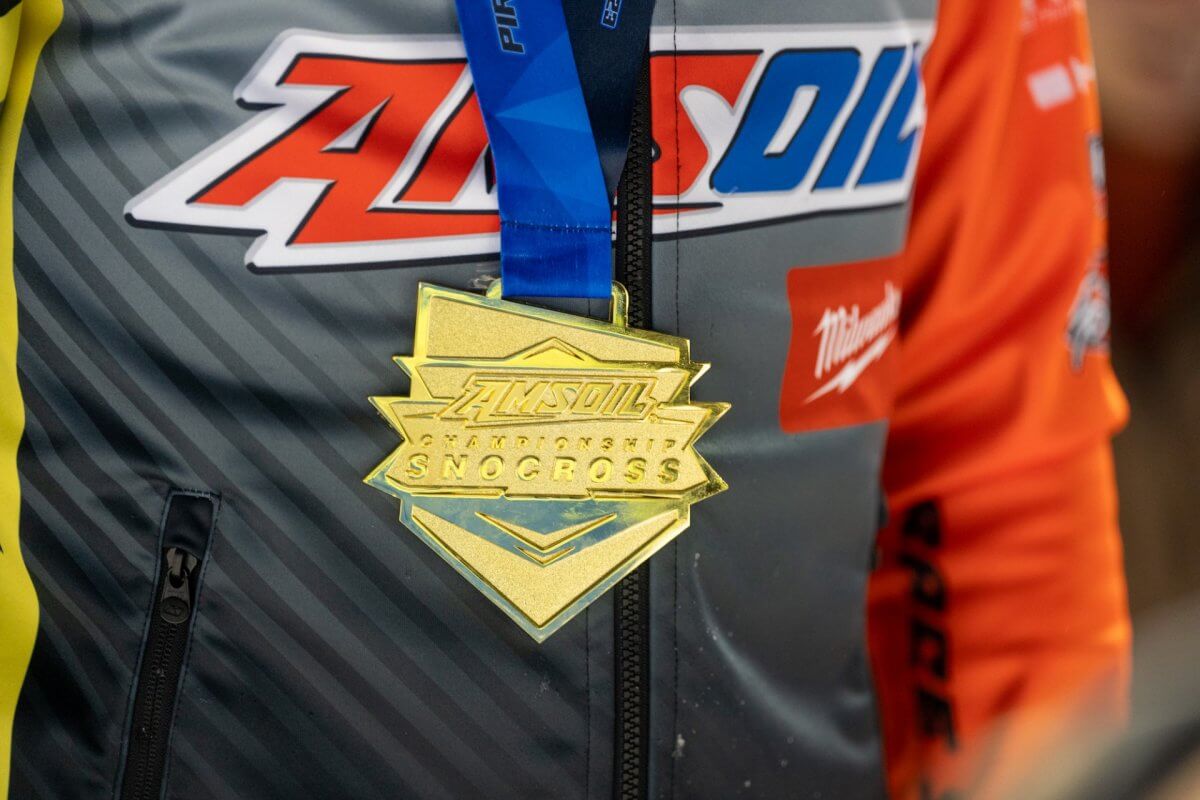 Shakopee. Minn. ~ After a hard freeze in Fargo opened up the AMSOIL Championship Snocross season last month, the second weekend of racing at Canterbury promises to be clement in comparison.

With a few weeks off for the holiday’s, a healthy field of competitors returned to action at the annual PIRTEK Snocross National. And while the defending champions in the Pro classes fared well in Fargo, other championship contenders were looking to shake things up in Shakopee.

There is an entire field of Pro driver’s looking to stop the reign of Elias Ishoel atop the snocross world. Hunter Patenaude, who finished second to Ishoel in 2022, is high on the list of people who are expected to challenge for the 2023 championship.

His 2023 season didn’t get off to the best of starts as the Ski-Doo rider entered the weekend eleventh overall. But Patenaude put faith in his abilities and put together a near perfect day of racing on Friday to jump back into title contention, and he did it with a little help from his closest ally.

Patenaude, the number two qualifier, nailed the hole shot in the final. One of the only drivers within striking distance was his teammate, Logan Christian. Together, they clawed their way around the rough track, and never relinquished the top two spots. Even though the season is still young, Patenaude’s win, as well as Christian’s runner-up finish, were a key moment for a team with championship aspirations.

“Logan and I actually had a pretty deep conversation after Fargo and we were just trying to think about what we were doing and what we do better,” said Patenaude. “Over the break we just worked really hard and continued to push each other and I think that that just showed tonight. It’s fun to be able to have such a close relationship with my teammate and I’m just super grateful for the whole team that we have behind us.”

Part of the reason for the big lead also came thanks to a first lap crash that collected several sleds, including Ishoel. By the time everything was sorted out, Ishoel was a lap down, opening the door for several drivers to grab important points.

Kody Kamm showed his championship credentials early on, charging into third and laying down serious pressure on Christian for the second spot. But he got kicked off the sled with seven laps to go and that opened the door for Daniel Benham to lock in his second straight podium finish. But Emil Harr continued his career-long trend of moving into a podium position late in the race. Harr caught up to Benham and made it into the final three with just over a full lap remaining.

Jordan Lebel is halfway home to his quest to best his of six straight wins to start the 2022 season. He had a bit of work to do, and Friday night’s race showed that he and Ryley Bester may be locked into a season-long showdown.

Lebel started fifth and had to stay clean as several sleds fell to the wayside around him. But he was able to find an inside line that worked well and caught the backside of Bester on lap six. Lebel remained calm and as the pair started working through lappers, he was able to find a hole and get into the lead. He would sneak away from Bester on the way to his third straight win of the new season.

“I found a good line doing a wheelie over the little bump before the finish line and it just worked really well,” said Lebel. “It was great to not have to battle too much with Ryley, still a really good race and it was a lot of fun.”

While it was Marcus Ogemar who got the hole shot, Bester has possibly been the best rider at grabbing game-changing starts this season. He was right in the mix off the start and was able to work his way into the lead on lap four. It appeared as if Bester was going to thwart any challenges from Lebel, but a broken goggle strapped became an impediment late in the race. Bester kept pace but had to maneuver through lapped traffic on his way to his third straight runner-up finish.

Andy Pake had his work cut out for him early on. Credited with a ninth place start, Pake kept finding good lines and ten laps in, he moved into third, before riding uncontested for his first podium finish in 2023.

It has been a year since Taven Woodie stood atop the Pro Women’s podium, winning at Canterbury in round two.

Woodie let history repeat itself as the Arctic Cat rider found a hidden double section that allowed her to sneak past Inanna Hauger with three laps to go for her first win of the season.

Hauger once again grabbed the Stud Boy hole shot and was able to keep the pressure on Woodie to the finish line. One of the reasons for that was because defending champion Malene Cottew kept pushing the pace behind her, finishing just a half-sled length behind Hauger in third.

The Butcher Makes the Cut in Pro Snow Bike

After sitting out the Fargo rounds, Snow Bike made its season debut in Shakopee and every lap counted in the two moto format.

Defending champion Jesse Kirchmeyer set the pace early, winning moto 1 with a clean run. He was followed to the line by Yanick Boucher and RJ Marnoch.

Things got a little slippery in the second moto. Just days after breaking his ankle, Troy Horbaty grabbed a massive hole shot and was in position to win the moto and possibly the overall, but a late race slip put Boucher into the lead. The Butcher would go 2-1 for the overall win, with Marnoch (3-3) in second and Horbaty third overall. Kirchmeyer was unable to finish the second moto after he pulled off with a mechanical issue.

FXR SPORT: The long holiday may have given the sport a pause, but nothing seems to be slowing down Crayden Dillon this season.

Dillon swept the opening weekend in North Dakota, and he continued to set the pace in FXR Sport in Minnesota. Dillon led from start-to-finish for his third straight win and an early stranglehold on the points race.

Drew Freeland notched his second podium finish of the year after a race-long battle with Tyler Archambault.

SPORT LITE: Brady Freeland kept early race leader Brandon Nelson in his sights and was able to get around the points leader on lap five before powering his way to his first Sport Lite win.

Nelson, who swept the opening weekend in Fargo, set the race’s fastest lap time on just the second lap. He settled into his final running position of second behind Freeland, finishing ahead of Justin Blazevic, who edged out Kenny Goike and Dylan Lebel.

The latest victor was the elusive Lincoln Skar, who jumped into the lead from the get-go and never looked back. Sammy Sheldon returned to the podium for the second time this season. He and Jack Gelinas had a drag race to the finish line for the runner-up spot, with Sheldon holding off Gelinas for the position.

Transition 9-13: Tavin Knudson opened the season fifth in Fargo but found more success in Shakopee thanks to a winning run on Friday in Transition 9-13. He was followed by a pair of Skogquist’s. Wyatt Skogquist got the edge over round one winner AJ Skogquist for the runner-up spot.

Jr. 14-15: Dylan Lebel took the lead early and held on late to pick up his second Jr. 14-15 win of the season, but his first in classes Friday night championship. Lebel held a strong lead over Caiden Pflipsen, who set the race’s quick lap late in the race but wasn’t able to catch the race leader. Defending class champion Isaac Peterson finished third.

Transition 8-10: Ryan Shimanski opened up his 2022 title defense in Fargo with a win, and the Polaris driver backed it up with his second straight Transition 8-10 victory at Shakopee. Tripp Knudson held off Logan Bruch at the line for second.