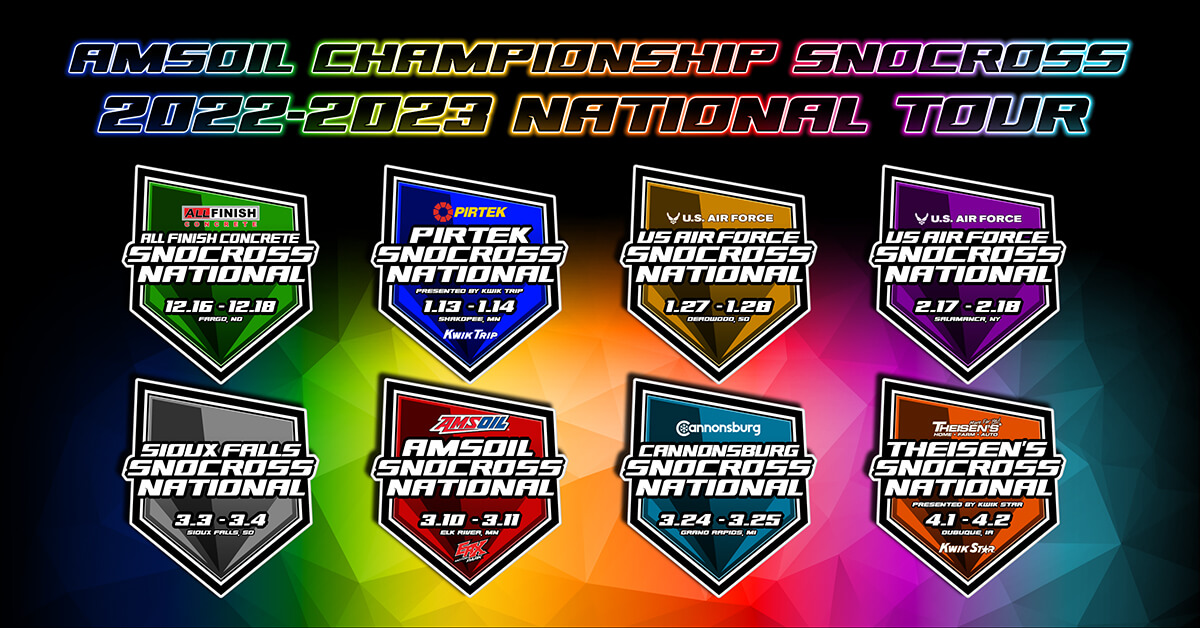 ALBERTVILLE, MINN. – The AMSOIL Championship Snocross schedule is set, and the high-flying, bar-to-bar action is excited to celebrate its 15-year anniversary season . The 16-round series returns to a pre-New Year’s start with the All Finish Concrete Snocross National being held December 16-18 in Fargo, N.D. The three-day event will include the AMSOIL Dominator, which will open the season and return to a head-to-head format. “The AMSOIL Dominator will be a fast-paced, man-versus-man event that will have race fans on the edge of their seats,” Schubitzke said. “This race will set the tone for an exciting year of racing with ACS.”

The All Finish Concrete Snocross National will be held once again at the Red River Valley Fairgrounds in West Fargo, ND and will mark the third visit in series history. The venue doubles as a professional practice facility during the winter months. In the summer, it is a 3/8-mile dirt track and has hosted premier dirt racing series such as the World of Outlaws for more than 35 years. In 2022, the Snocross course was one of the most innovative and thrilling track builds the sport had hosted thanks to the vision and hard work of Snocross legend and multi-time national champion, Robbie Malinoski.

After the calendar flips to 2023, the series heads to Shakopee, Minn. January 13-14 for the Pirtek Snocross National. The annual trek to Canterbury Park has been a favorite for both fans and driver’s over the years thanks to its big jumps and spacious track. The event takes place in the Twin Cities metropolitan area which historically brings in a stout crowd of motorsports enthusiasts. The venue’s capabilities to provide a lengthy, fast, and challenging course that kindles top-tier racing has garnered the horse racing track the nickname, “The Daytona of Snocross”. The Pirtek Snocross National has been a staple to the tour since the 2011-2012 season.

From wide-open to tightly packed, the series moves West to Deadwood, S.D. for the two-day U.S. Air Force Snocross National on January 27-28. Competitors will tackle the altitude, and the most compact track of the season. The tight, technical course truly is the “wild west” of Snocross racing, providing a spectacle of big air and big thrills, at the historically sold-out Days of 76 Rodeo Grounds. The track has continued its trend of crowning new winners. Most recently, Emill Har (PRO, 2022) and Evan Christian (PRO LITE, 2022). The venue rests in the heart of historic downtown Deadwood and is within walking distance of restaurants, hotels, gaming, and family-friendly attractions. The west river fans fill the house and have provided the racers a sold out crowd on multiple occasions. There is no stop on the tour that allows attendees to spectate closer to the track than Deadwood.

The mid-point of the schedule has teams traveling east to up-state New York and the snow-filled Finger Lakes region. The annual stop in Salamanca, N.Y. will feature two-days of racing on February 17-18 at the Seneca Allegany Resort & Casino.There has long been a strong appetite for snowmobile racing amongst the East Coast and New England regions, which makes for a spirited spectator hill.

One of the most noteworthy additions to the 2022-2023 schedule is the series return to the Sioux Falls, SD area. By popular demand from the racers and the local community, ACS is slated to visit legendary Huset’s Speedwayin Brandon, S.D., just 15 minutes from downtown Sioux Falls for the first team in series history, joining the likes of national touring series to compete at the venue including the All Star Circuit of Champions and the World of Outlaws. In 2021, ACS made its first ever visit to the tri-state area (Held at the W.H. Lyon County Fairgrounds) after pandemic-related regulations prevented the tour from visiting Canterbury Park on its scheduled date. The visit to the all-new market resulted in a major success in part due to the area being a community with roots deep in motorsports history..

The following weekend, action continues at the renowned ERX Motor Park in Elk River, MN for the AMSOIL Snocross National featuring round 11 and 12 on March 10-11. The big track.is the home track to many of the top pro riders, and the year-round venue boasts a monstrous racing surface that combines high-speed with big-air and brings fans up-close to all the action. Located northwest of the Twin Cities, the venue is home to other internationally-recognized circuits and events including ACS’ sister series, AMSOIL Championship Off-Road, Nitro RX, The Ditchbanger Open, Midwest Ride-In, and numerous others throughout the year. The 2022 edition will mark the 5th visit in series history.

The season finale will be a two-day event hosted in Dubuque, IA. The series makes its return to Sundown Mountain Resort, marking the first visit since the 2018-2019 season, which was the third in series history. For the past two seasons, the Theisen’s Snocross National had been held at the Dubuque County Fairgrounds. This weekend will also feature a season-ending banquet, the AMSOIL Night of Champions. Please stay tuned for banquet information.

“A lot of work has gone into our schedule to give our races and fans the best experience possible, week-in and week-out,” said ISOC president Carl Schubitzke. “We had to leave some long-standing traditions behind, but over the past few seasons we have been able to build new ones and go to venues that are world-class and ready to push snocross forward.”

Event day schedules and tickets will become available in the coming months at snocross.com.

Fans who can’t attend the races can tune in all season long on the FloSports/FloRacing network with a subscription. Pro races will be televised at a later date on the CBS Sports Network. Please stay tuned for more live stream and televised programming information. AMSOIL Championship Snocross airs all rounds live, with full replays, on FloRacing.